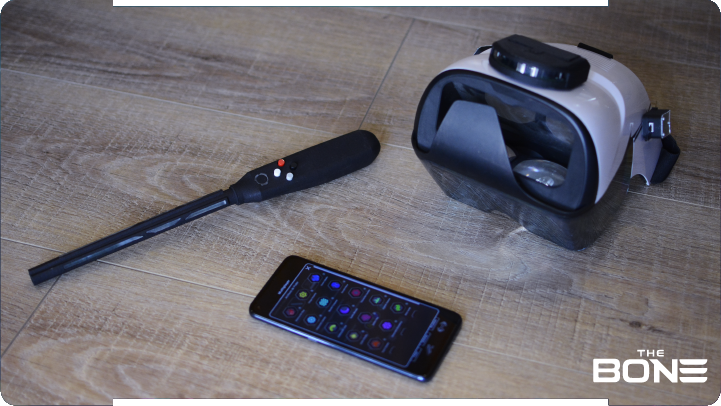 Caster Gear is the element of the Bone that allows recruits to manipulate Universal Particles in nature as well as see their effects in the quantum realm in order to battle others in real life. This gear is the most up to date version of the EPM and is designed for battle. The gear consists of three main parts: the Headset, the E-pon, and the Caster's smartphone with the Bone app. A recruit that owns or focuses on real world combat using Caster Gear is known as a Caster

The Caster Gear was first developed after the Invertebrates attacked the first Recruitment Center in April 2020. The High Command knew that war was coming and redesigned the EPMs to be more effective in combat. They were able to build the first Headsets quickly using simple mirrors to see the phone screen, but the design was later optimized for more efficient set up and more stable movement. The E-pon, however, went through many prototypes before the one that is in use today, and even that is not the final version that will be released to the public. As of now, only one type of E-pon exists, but there have been rumors of other types in development.

The Bone App is the most optimized version of the Bone to date. It combines a UPD, PCM, Alchemy lab, Virtual Battle Simulator, and more into a single app that is compatible with Android and iOS smartphones. While the app was available for certain recruits for a short time before RC2 opened, Anonim@(link) shut down that version of the app to make improvements. As of now, no one has access to the app, however, Anonim@ will soon be releasing it to select recruits through the CRC, and eventually the general public. The app is run by an extension of Anonim@ called an Artificial Visual Intelligence (AVI, pronounced "Abby") that will assist recruits in all areas of the app. While AVI does not have a physical form, recruits can select different avatars, or Nereas(link), as AVI's visual representation for many areas of the app.