The Bone Universe Wiki
Register
Don't have an account?
Sign In
Advertisement
in: Caster Gear, The Bone System 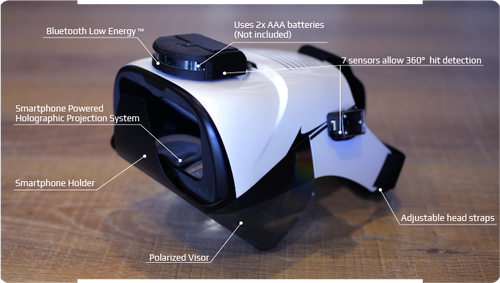 When Universal Particles were first discovered, the physicists had to use CERN's electron microscope to be able to see the quantum realm that they were manipulating. This was suitable for the scientists' early experimentation, but as the tests became more extensive they needed a way to test outside the lab.

As they began integrating different aspects of the Bone into portable technology, they developed a way to have a phone show a visual representation of the UPs and of the effects of Power Archives. It was not showing the actual quantum realm, but a representation based on the Particles that it was detecting. The only problem with this was that the phone had to be held up to the face in order for it to work. Naturally, this made experimentation significantly more difficult.

This was the design that was in use when the the New World Affairs Commission took over the project and the first Recruitment Center used it in their early tests with E-pons. Unfortunately, it was not stable enough for the high level of movement needed for combat. The recruits optimized this design to secure the smartphone in place, improved the the mirror design to be a heads up display (HUD), and added sensors to detect hostile PAs. This is the version that is still used today.

The HUD is as simple as placing a smartphone with the Bone app into the secure sleeve on the front of the casing. The screen of the device is then projected onto the polarized visor and warped slightly to be easier to see. This makes it so the Caster is not actually looking through the screen of the phone, but beneath it, thereby protecting their eyes and making sure that they can see the real world.

The sensors connect to the equipped smartphone through bluetooth and give the Caster 360° warning of incoming, hostile PAs. They detect the disturbance of UPs in front of PAs and use that to determine the direction the Archive is coming from. The Caster then sees an arrow on their HUD alerting them to the projectile and giving them the opportunity to counter it.

To see a Headset in action, check out this gameplay demo.

Community content is available under CC-BY-SA unless otherwise noted.
Advertisement